faith, life, and wonder at ESD

On the calendar over the next month, Christians like me will be celebrating in a blur three periods: Advent, Christmas and Epiphany. Additionally, we here at ESD are wondering about the virtue of joy for the next several weeks. Lots to think about and unpack there. My goal by the end of this reflection is that you can see how all four of these connect.

I start with an image of joy from the Bible – probably my favorite- Luke’s description of Mary’s visit to her cousin, Elizabeth. Mary, having recently conceived Jesus and newly pregnant, went to visit Elizabeth, pregnant herself with John the Baptist. When Elizabeth heard Mary say hello upon arrival, Elizabeth exclaimed:

“As soon as the sound of your greeting reached my ears, the baby in my womb leaped for joy.”

The childlike innocence wrapped in the image of the unborn John the Baptist jumping with unbridled enthusiasm at the arrival of his savior Jesus captures the uncontrollable physical exuberance that I associate with feeling joyful. Yahoo!! I feel good!

It is this joy that Christians anticipate during the Advent period – that period of solemn waiting for the Savior to appear. We are patient; we contemplate; we think (ah yes think, think, and think); then suddenly Jesus arrives, and we are reminded that God loves us so much that he sent his only begotten son to be incarnate on the Earth.

So, joy and Advent and Christmas. They all go together. So what about this Epiphany thing? What’s that all about? Well…. the word epiphany means in a generic or basic sense: a revealing scene or moment. In the theological sense it describes the revelation to the Gentile Three Wise Men that Jesus Christ – the Son of God – had arrived. I would offer that an Epiphany is a moment in life when a profound spiritual truth is revealed as to deeply impact your life’s outlook. So, I have an Epiphany story to share with you and to make it even better it’s a Christmas story!

My Christmas tale starts though in the summer, the summer of 2017 in the Baad household in Washington DC. Mrs. Baad, our daughter, Kinza, and I were discussing our plans for the upcoming Christmas break. We decided after some back and forth that we would go to the North African country of Morocco. Now for most of you, that sounds like an exotic and perhaps somewhat non-traditional destination for a holiday break. For us though, it was something quite different. For us it was simply a family trip. My wife, Hafida, is Moroccan, and she had asked me and Kinza if we would not mind spending our Christmas break visiting her parents (Kinza’s grandparents) along with her sisters, brother, and extended family. Now as some of you know, I am Catholic and my daughter Kinza is as well, so she and I sort of looked at each other and I am sure both thought, “Hmmm, Christmas in a Muslim country. Not ideal, but we know it will mean a lot to Hafida if we visit her family, so sure let’s go.”

Now I am lucky because, unlike some, I have a really good relationship with my in-laws: my wife’s two parents, her three sisters and her brother. I get along particularly well with my mother-in-law, Haja Khadijah, whom I call “mwee”, Moroccan dialect for “mom”. She has earned the “Haja” before her name Khadijah because she has completed the required Muslim pilgrimage to Mecca.  Some say she and I get along so well because we have no languages in common – I speak English and some French; she speaks Arabic and Amazigh – but I think it is really because we share common views about a lot of things, and I have deep respect for the way she conducts her life.

An illustrative story about my mother-in-law….My wife comes from a very large family. Her two parents combined have close to twenty brothers and sisters, most with large families themselves; therefore, my wife has about 85 first cousins. When we visit her parents’ house in Casablanca, it is typically a hurricane of activity with various cousins and children of cousins circulating through the premises. It is hard for me to keep straight the names and faces of all the people I meet. One morning early in our last trip, Mrs. Baad and I returned from an outing, and there in the living room was a woman I did not recognize talking to my mother-in-law. I said to Mrs. Baad, “Who is that? Another cousin?”, assuming it was yet another family member that I had either not met or forgotten about. Mrs. Baad replied to me that “no”,  that woman was actually a refugee from Syria. My mother-in-law had come across this woman begging in the street. “Mwee” Haja Kadijah had stopped to talk to her and discovered that this woman’s husband had been killed in Syria and that she and her children had fled the war and violence in that country and to Morocco with nothing but the clothes on their backs – hence the reason she was begging in the street. My mother-in-law, a woman who enjoys a comfortable standard of living, but certainly not an abundance of wealth, told the woman to come by her house every Monday so that my mother-in-law could give her the weekly food staples she needed to feed her family – flour, milk, salt, etc. You see, my mother-in-law is a very devout Muslim who adheres to the five pillars of the faith – one of which is Zakat or charity. She lives her faith as well as anyone I know.

So back to my story and fast forward a few months to December 25th, 2017. Christmas morning dawned in Casablanca, the Moroccan city in which my wife’s family lives, and our day had started. Being in a Muslim environment, I almost forgot that it was in fact Christmas. People were going about their daily lives, going to work, doing their daily food shopping. For them, it was a day just like any other on the calendar. In the late afternoon, as is custom in Morocco, we were invited to my wife’s cousins house, just a few blocks away, to have casse croute, basically what amounts to afternoon tea. Living in that house was cousin Said. He and his two adult sons Ayoub and Yassine have always been among the most interesting people for me to talk to in Morocco because of their own deep Muslim faith and interest in politics and world affairs. I love these particular casse croute get-togethers though for two reasons. First, the food is awesome, and I have a serious sweet tooth that gets satisfied. Second and more importantly though is the music. Mrs. Baad’s extended family is very musically talented, boasting several professionals in their midst. At these teas, two or three dozen cousins will pack into a living room with traditional drums and other instruments and jam – and I mean jam – Moroccan folk music for hours on end, dancing and singing. Among my favorites is an aunt in her late 50’s whose exuberance while performing is the definition of pure joy. I mostly watch and clap awkwardly, but among the favorite moments for the group is when a foreigner like me gets up to sing and dance. Lots of whooping and encouraging laughter. Yes, there is video. No, I won’t be showing it to anyone here.

After jamming for several hours, the party started to break up, and I assumed that we were heading back to my wife’s family home a few blocks away for dinner and bed and the end to my “Christmas” day. Instead one my sisters-in-law said, “Hey, let’s take the whole party back to our house!” And away we went, singing and dancing the few blocks through the Casablanca streets. When we arrived and Kinza and I walked into the living room, low and behold in front of us was a fully decorated Christmas tree with presents for both of us. My sisters-in-law had snuck out of the previous party and prepared this celebratory surprise for us. All thirty people had come back to this house to join in.

While receiving the presents was nice for both of us, what followed was even more meaningful. First, my mother-in-law, this devout Muslim who understands God’s message of love (she wills the good of others as others like no other) as well as anyone I know, took my and my daughter’s hands and began to recite prayers of blessings to both of us. She begged God to protect us from harm and grant us joy and contentment in our lives. There was an intensity to her prayer, a gentle and rhythmic rocking back and forth, and a moving quality in her voice that indicated a complete belief in God’s will and goodness. As you can imagine I was overwhelmed. What came next though was almost indescribable. Cousin Said, remember another extremely devout Muslim, began to recite to us from memory and in our honor the passage from the Muslim holy book, the Koran, that recounts the immaculate conception and birth of Jesus. Many of you know Jesus is considered one of the important prophets in the Muslim faith. Here is an English translation of some of what he recited some of which not surprisingly echoes the scripture we heard earlier today:

“And the angels said, ‘O Mary, indeed God gives you the good news of a word from Him, whose name will be the Messiah Jesus, the son of Mary, held in honor in this world and in the Hereafter, and of those who are near to God.’  ‘He will speak to the people in the cradle, and in old age, and he will be of the righteous.’ She said, ‘My Lord, how can I have a son when no man has touched me.’ He said, ‘So (it will be,) for God creates what He wants. When He decides something, He only says to it, ‘Be,’ and it is.  And He will teach him the Book and wisdom and the Torah and the Gospel. And (will make him) a messenger to the Children of Israel (saying), ‘Indeed I have come to you with a sign from your Lord.”

And right after Jesus’ birth

“So Mary pointed to Jesus.  They said, ‘How can we speak to a child in the cradle?’ But (Jesus) said, ‘Indeed, I am a slave of God.  He has given me the Scripture and made me a prophet.[4] And He has made me blessed wherever I may be, and He has enjoined on me prayer and charity as long as I remain  alive. And (has made) me kind to my mother, and did not make me arrogant or miserable. And peace be upon me the day I was born, and the day I will die, and the day I will be raised alive.’” (Quran 19:22-33)

I am not embarrassed to say that his Said’s recitation reduced me to tears.

They say that crying is not an expression of sadness but rather simply an inability to hold in powerful emotion. Hence the reason that people can cry for joy as well as sorrow. In that moment, that totally unexpected Christmas moment, I experienced an uncontrollably joyous Christmas epiphany. I realized a connection within the human family across different beliefs and cultures that was as spiritually powerful as anything I have ever felt . It came from a place of mutual respect, love and admiration. Never have I sensed more that we all are truly made in the image of a loving God.

Christmas in a Muslim country indeed! One of the most religiously meaningful I have ever experienced, celebrating the arrival of God’s word incarnate on Earth. Amen.

Let us stand for our prayers. 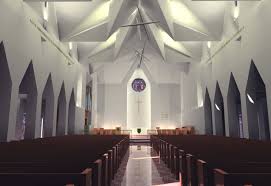